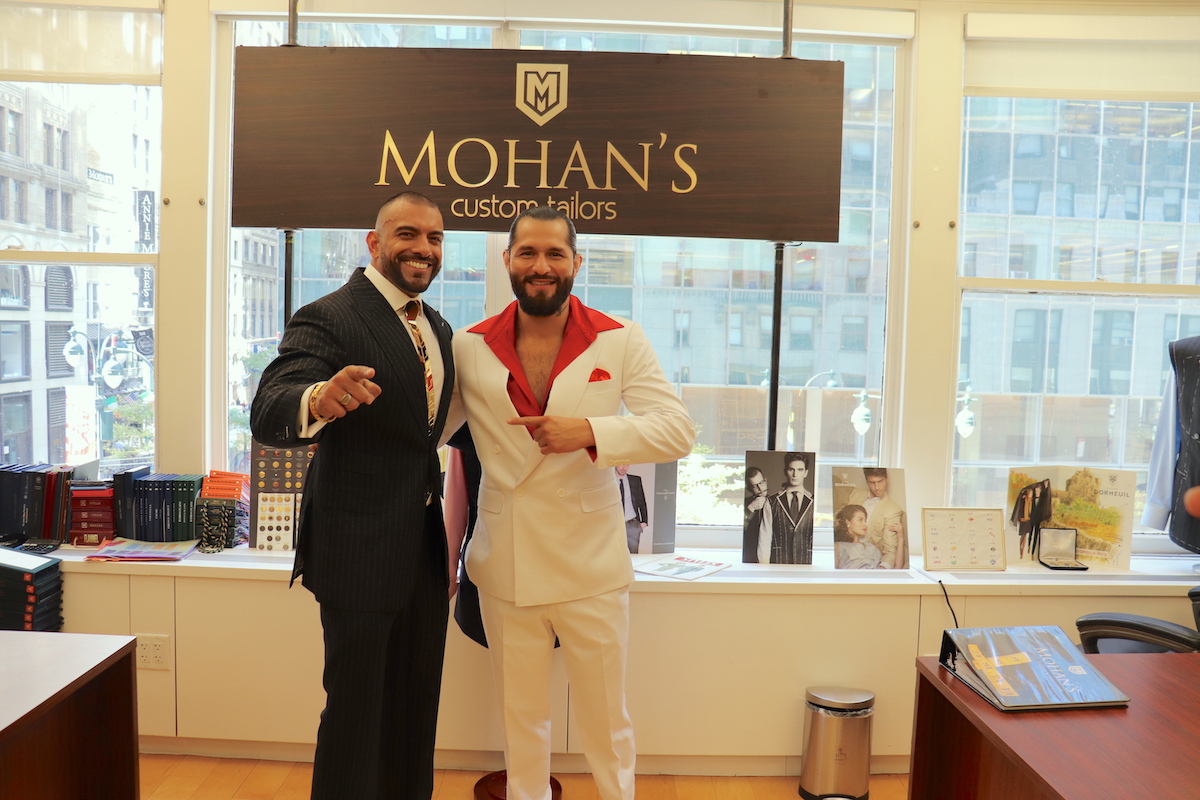 WHO MADE JORGE “GAMBRED” MASVIDAL’S FANTASTIC SUIT??? Everyone asked this question at last night’s press event (September 19) for the upcoming UFC 244 between Jorge Masvidal and Nate Diaz. Even major media outlets were asking this question at the presser — hosted by UFC’s renowned President, Dana White, which was held at New York’s Pier 17 Rooftop — with CBS Sports writing:

“The New York City press conference for the UFC 244 welterweight headliner between Nate Diaz and Jorge Masvidal was lacking in fireworks, but not in style — at least on Masvidal’s side of the stage. While Diaz was dressed in his standard black t-shirt, Masvidal paid tribute to Tony Montana, Al Pacino’s character in ‘Scarface.’ Decked out in a white suit with a largely unbuttoned red shirt and red pocket square…”

The answer? If you’ve been following news from our website and social media channels, you already know–it’s Mohan’s Custom Tailors!!! 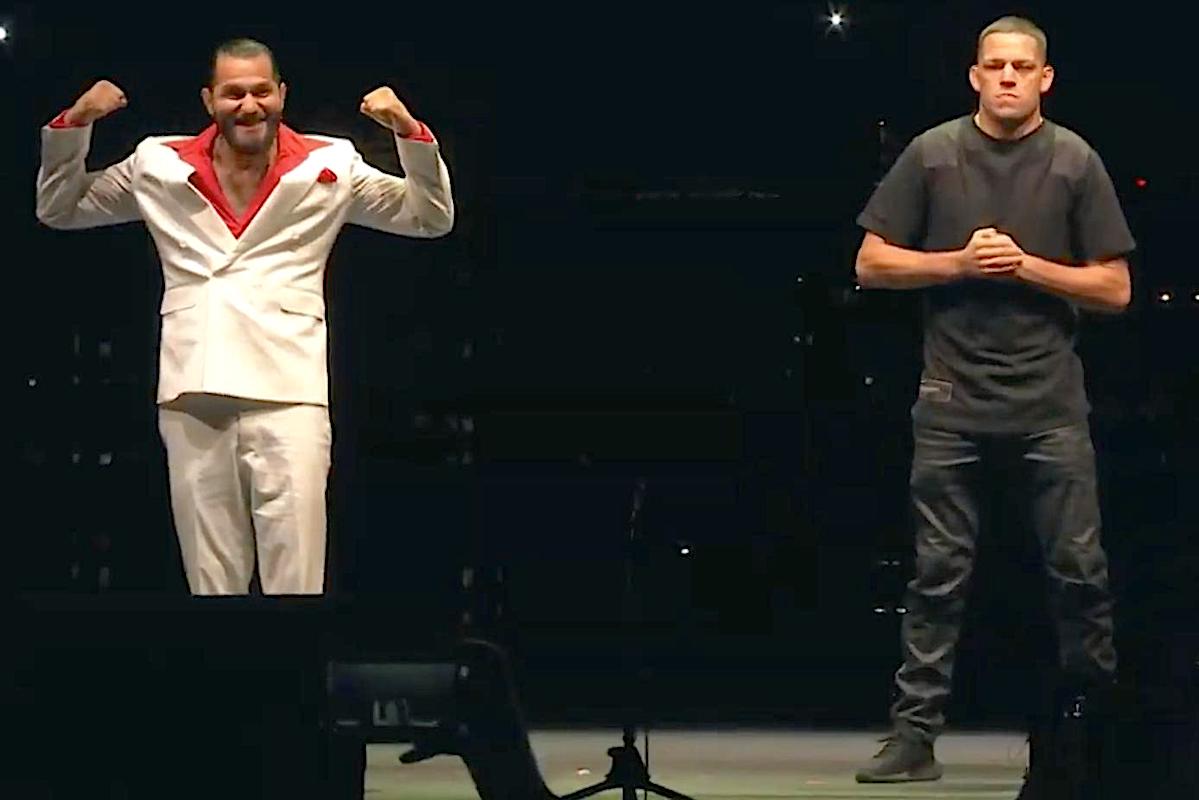 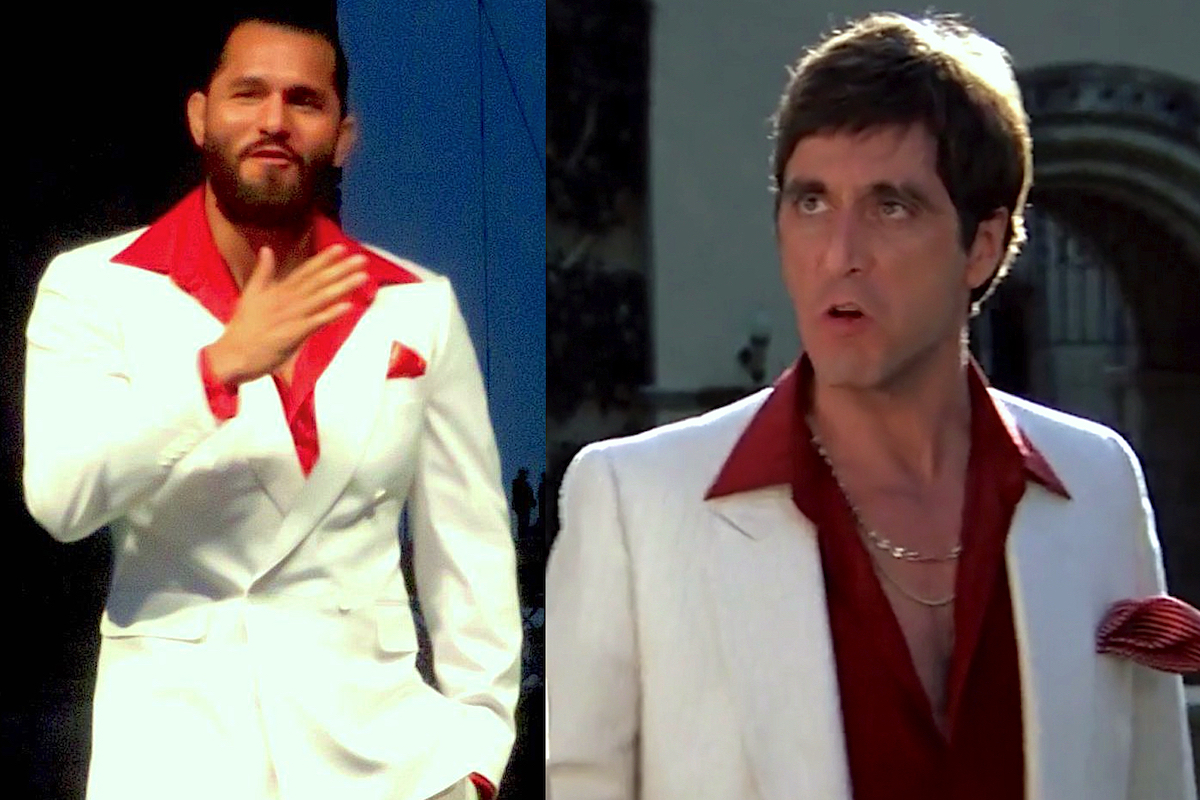 CLICK ON THIS LINK TO READ THE COMPLETE ARTICLE ON CBSSPORTS.COM

Design and Creation of the Scarface Tribute Suit

Victor Mohan, the legendary Mike Mohan, and Victor’s family visited Miami in July to meet with Mr. Masvidal and his powerhouse manager, Abraham “Abe” Kawa, of First Round Management, to discuss the design of special suits and fashion accessories for this UFC superstar.

When Nate Diaz called out Mr. Masvidal after winning UFC 241, challenging him to a fight in California — UFC 244 will be held instead in New York City — the time was right for Mohan’s to get ready to complete his visionary, 100% custom wardrobe for the press conference. Jorge Masvidal had a vision for his special Scarface tribute suit; Victor Mohan made his vision a reality. Victor, Mike Mohan and the entire Mohan’s team designed and handmade the suit, the famed red shirt, the pocket square, down to every stitch and detail, also giving the suit personalization with custom “Gamebred” embroidery, special pinstripes, and other details. While evoking the character, Tony Montana’s, signature white suit, this new bespoke suit for Mr. Masvidal features more modern touches and an athletic, entirely body-tailored cut.

While getting ready for for last night’s unveiling, Victor asked Mr. Masvidal about the suit: “When we first met in Miami (to plan Mr. Masvidal’s wardrobe), you mentioned that you are going to hurt people’s feelings, but in a positive way.” That reveal was, of course, last night, for this very important match with Nate Diaz. It was the ideal occasion to show off his new bespoke masterpiece, during a still-warm, crystal-clear-skied September evening in New York City, at the glamorous Pier 17 Rooftop.

Mr. Masvidal was “pumped” about divulging what Mohan’s created from his vision. He said: “Wait until this suit drops though, that’s going to be the REAL pleasure.”

And… there’s even more news from the Gamebred Fighter and Mohan’s Custom Tailors. What is it? You’ll have to STAY TUNED to find out!

In the meantime, take a look at all of the photos from Mr. Masvidal’s and Mr. Kawa’s visit to our Manhattan showroom (in a National Historic Landmark, and New York City Landmark, building, conveniently located across the street from another world-renowned Landmark, Grand Central Station).