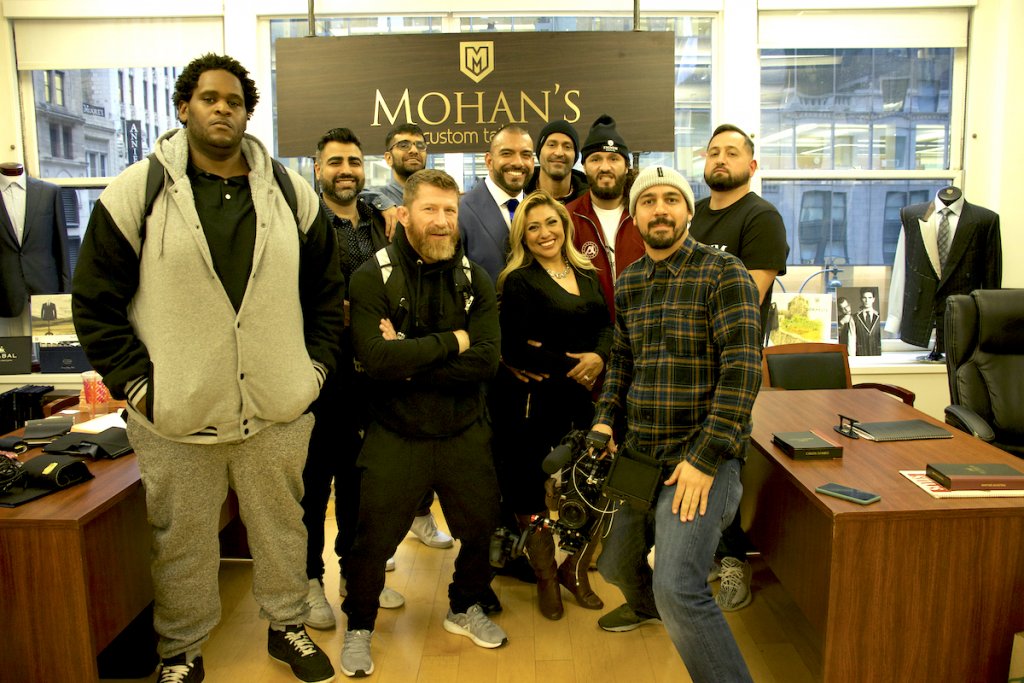 Ahead of the monumental Ultimate Fighting Championship match this Saturday, November 2, 2019 (UFC 244 at Madison Square Garden), between Jorge “Gamebred” Masvidal, Mohan’s Custom Tailors‘ superstar client, and Nate Diaz, “Team Masvidal” visited our showroom, along with Curran Bhatia, producer and host of the “Ask the Experts Podcast” and the team from “UFC Embedded”. The great fighter, Mr. Masvidal, and his powerhouse manager, Abraham Kawa, of the leading UFC and other sports agency, First Round Management, brought other superstars to the showroom to meet with Victor Mohan and the Mohan’s team, including mixed martial artist, actor and former UFC Heavyweight Champion, Andrei Arlovski, Legendary Coach, Mike Brown, and we were honored to meet Mr. Masvidal’s father, Jorge Masvidal, Sr., who also joined the group.

Mr. Masvidal turned heads at the UFC 244 press event in September by wearing a special fashion creation, developed in collaboration between this great record-holder for the fastest knockout in UFC history, his manager, Mr. Kawa, and Victor Mohan, Mike Mohan and the entire Mohan’s Custom Tailors design team. It was a 100% custom-produced, handmade, all-white suit, created as a tribute to Tony Montana from the legendary 1983, Brian De Palma film, Scarface™️, a paean to his Cuban heritage. This time, in preparation for the big event at The Garden on Saturday, the entire Masvidal Team came to the showroom, fresh off of the plane, to discuss some upcoming fashion “surprises” on which Masvidal and Team Mohan’s are developing, for some of them to get fitted for their own bespoke suits and other garments, and for on-site interviews.

While at the Mohan’s Showroom, it became “command central” for media interviews with Mr. Masvidal and with the Mohan’s team. Among them, Masvidal had a live press interview over the phone with “MMA H.E.A.T.”

Victor Mohan had interviews with Curran Bhatia for the ATE Podcast–his second, after a first interview during the September UFC 244 presser, wherein he discussed Mr. Masvidal’s fresh-looking fashion and his own interest in Ultimate Fighting, MMA and in Mr. Masvidal’s career. While Mr. Bhatia interviewed Mr. Masvidal himself after his interview with Victor, Victor had an interview with the UFC Embedded team, in which he will be featured this week.

This is a very special moment for Mohan’s, honoring the great Gamebred Fighter and wishing him the best for his big fight this weekend — it’s also the UFC’s 500th live event! — and as part of a long-running legacy of creating bespoke fashion for major athletes, Hollywood stars, business and political figures and fine gentlemen for nearly 50 years, and continuing to innovate today.