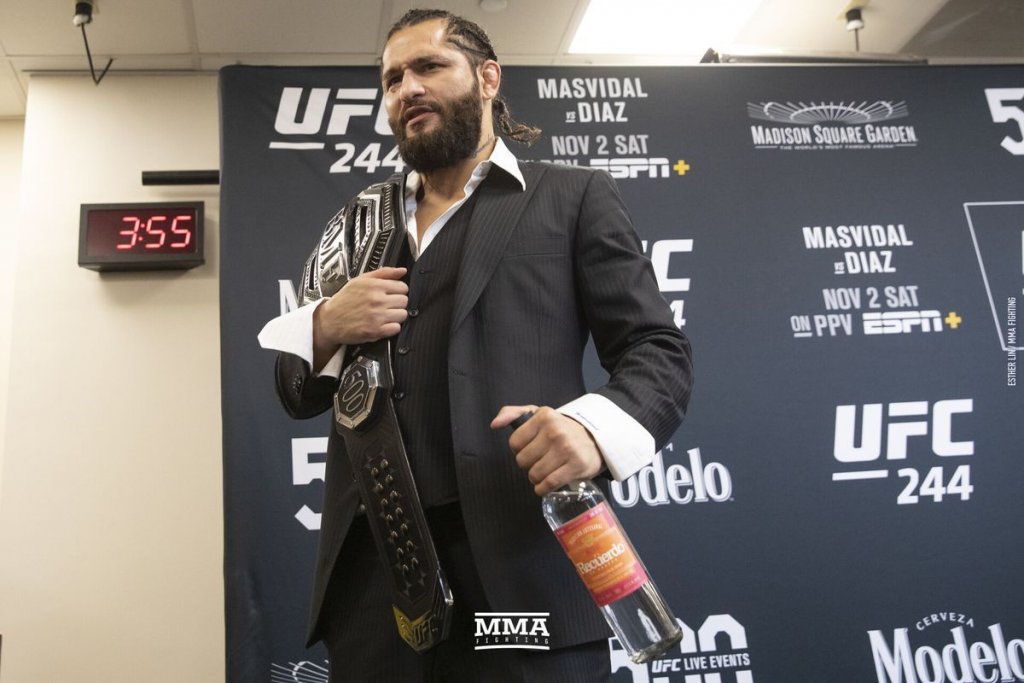 Mohan’s Custom Tailors is beyond-proud that MMA superstar, Jorge “Gamebred” Masvidal is the UFC Champion–the winner by decision of the title fight at UFC 244 (the Ultimate Fighting Championship’s massive, 500th Live Event!) against powerhouse Nate Diaz, which was held on November 2, at New York’s Madison Square Garden. Victor Mohan, a UFC fan for many years, had viewed Masvidal, the great UFC middleweight, as an upcoming megastar for nearly a decade, watching him compete for Bellator, Strikeforce, Shark Fights and World Victory Road. A prior blog post on the Mohan’s website explains Victor’s increased interest in Mr. Masvidal’s career, and his journey to approaching him to start an important men’s fashion collaboration.

With Mr. Masvidal’s preeminent manager, Abraham Kawa, of First Round Management, Mohan’s began working on designs — conceived by the collective Masvidal-Kawa-Mohan’s team — for custom menswear; then, Mohan’s, utilizing premium wools, silks, cottons and more from the company’s major luxury fabric makers, handmade the most special suits and more for the great fighter. After Nate Diaz called out Mr. Masvidal to fight him and take the title of the “BMF” of the sport — an informal title at the time, later anointed by UFC President, Dana White — Team Masvidal and Team Mohan’s put these fine garments into hyperdrive so that Mr. Masvidal would wear them at press events surrounding the next UFC event. In September, at a pre-fight press conference, Mr. Masvidal wore a unique, all-white suit, which was designed by Team Masvidal and Team Mohan’s, and made exclusively by Mohan’s Custom Tailors, that is a tribute to the character of Tony Montana in the film Scarface, and an acclamation of Mr. Masvidal’s Cuban heritage. Following his epic win of UFC 244 this past Saturday, Mr. Masvidal wore a new masterpiece, a dark, pinstriped, three-piece, handmade Team Masvidal-Team Mohan’s suit, in fabric from the famous Vitale Barberis Canonico, with a lavish custom-designed lining. These extraordinary pieces can be seen below.

After the “BMF” title was launched and the fight between Mr. Masvidal and Mr. Diaz was was announced, it launched a Twitter explosion–first with Masvidal writing to fellow Miami legend, Dwayne “The Rock” Johnson (Johnson was born in California, but attended the University of Miami, played on the Miami Hurricanes, then made Miami a central part of his life), “@TheRock I’m telling @danawhite I want you to put it around my waist 305 all day ?? #supernecessary”. The Rock replied to the tweet, “Doing all I can to make this fight. If I can and you win, I’ll put the belt around your waist at MSG – consider it done. Already shaping up to be one of the biggest and most electrifying fights in @ufc history. Can’t wait. @GamebredFighter @NateDiaz209 #respect #BMF #UFC244 ⚡️” At that point, a special belt was even developed for the event.

The President of the United States and The Rock Attend

In fact, UFC 244, again, the UFC’s 500th live event, which occurred in Madison Square Garden — in a state, New York, where Ultimate Fighting was once not even allowed to take place — got so big, so powerful, that, Donald J. Trump, the 45th President of the United States, announced that he would attend. It is the first time ever that a sitting U.S. President attended a live UFC event. Upon Masvidal’s win, The Rock lived up to his promise and put the belt on the champion.

When Mr. Masvidal arrived in New York last week for the events leading up to UFC 244, he and Team Masvidal set up “Basecamp” at the Mohan’s Custom Tailors Midtown Manhattan showroom. His entire “crew” was with him, including Mr. Kawa, and former UFC Heavyweight Champion, Andrei Arlovski, Legendary Coach, Mike Brown, and Mr. Masvidal’s father, Jorge Masvidal, Sr. (his “Papa Dukes”). They did interviews with UFC Embedded — with a full video crew in the Mohan’s showroom — and both Victor Mohan and Mr. Masvidal interviewed with Curran Bhatia, Emmy-nominated host and producer of the “Ask the Experts (ATE)” Podcast. We have posted some of these videos and interviews on the Mohan’s social media channels.

Victor Mohan and Curran Bhatia at the Fight

Mr. Bhatia and Victor Mohan attended UFC 244, sitting ringside in Mr. Masvidal’s VIP area, and visiting the VIP Suite before the fight. This was also a part of Curran Bhatia’s pre-event, during-event, and post-event set of live interviews with Victor for the ATE Podcast. The podcast interview is included here. Victor Mohan said to Curran Bhatia in the interview, “I saw this coming… when he fights, he fights like the terminator–it’s really scary.” Mr. Bhatia: “So, you said you’d be emotional to see him win. Are you starting to internalize the win?” Victor Mohan, “It will kick in I’m sure, after I go home… I think I’ll get emotional when I see him… we’re more like brothers now.” Don’t miss the entire interview, where Victor stated, “The reign of Masvidal is upon is… then the reign of Mohan’s in MMA, in the UFC, is upon us” as well.

SEE THE ATE PODCAST INTERVIEW BELOW