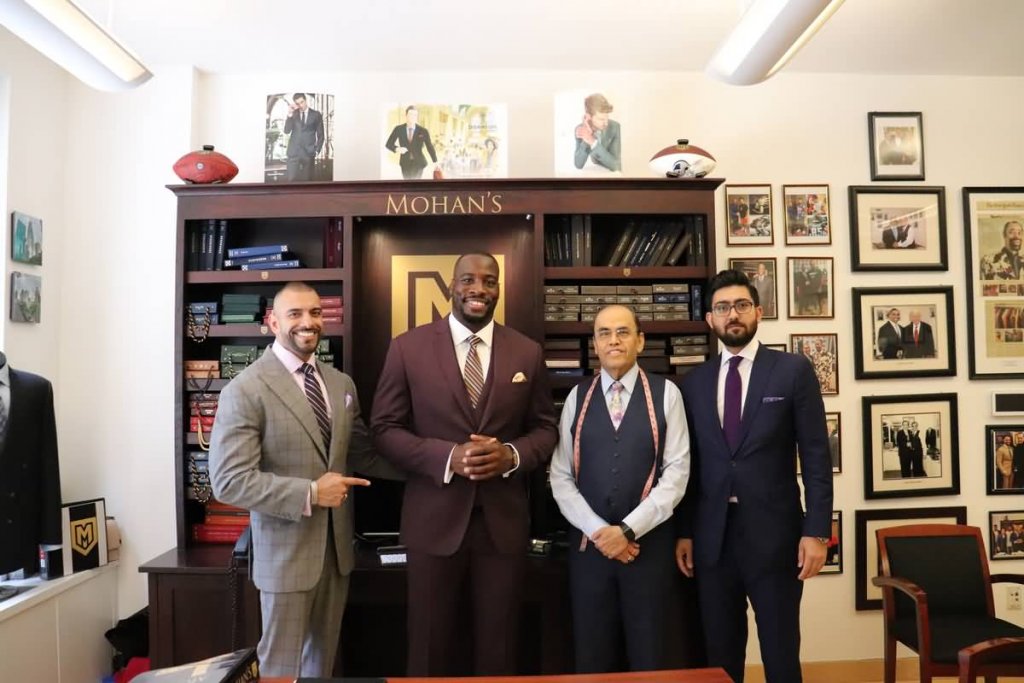 Mohan’s Custom Tailors was honored to create bespoke suits and accessories for Chris Manhertz of the NFL Carolina Panthers. The Bronx, New York-born tight end, whom, ironically, played basketball, not football, while at Canisius College, changed sports, began to train for football, and was signed by the Buffalo Bills as an un-drafted free agent in 2015. He then went to the New Orleans Saints, and moved to his current team, the Carolina Panthers, signing a two-year contract extension at the start of 2019.

Victor Mohan and the entire Mohan’s team — including our legendary founder, Mike Mohan, KJ Singh and master tailor Ken Wong — worked closely with Manhertz for several months to select fabric, styles, custom interlinings, and other unique details, and handcraft 100% custom vested suits and shirts. Like another recent player that Mohan’s served (for the Atlanta Falcons), Manhertz is, as stated earlier in this post, also a tight end. This position has what we previously described on this site as “hybrid characteristics,” with combined roles of a wide receiver and offensive lineman. Tight ends are typically tall, with very wide shoulders, but also very large legs and back areas to support their powerful blocking and running. Mohan’s team is used to this particular challenge when making suits, business casual jacket and pants combinations, shirts and more, creating fitted menswear, in wools and other fabrics that are not traditionally known to be “stretchy,” that breathe and move easily athletes someone with body types like Manhertz’s.

The photos in this post, below, are from Manhertz’s final fitting at the Mohan’s Custom Tailors midtown Manhattan showroom, where, in addition to the Mohan’s team being present, Victor was joined by his family.

“As an athlete, it’s very important to not only have the right fit, but also to have something that compliments your body to the T,” Manhertz said about the clothes that were made for him by Mohan’s. “As athletes, we might have bigger shoulders, might have skinnier waists, we might have bigger thighs, bigger calves…,” thus, the challenges that Mohan’s met in creating custom masterpieces for this great young athlete. Manhertz said that, “the whole process has been very seamless as far as the details and the stitching… the little accents, all the things that I like that are very important to me are all made in the one suit.”