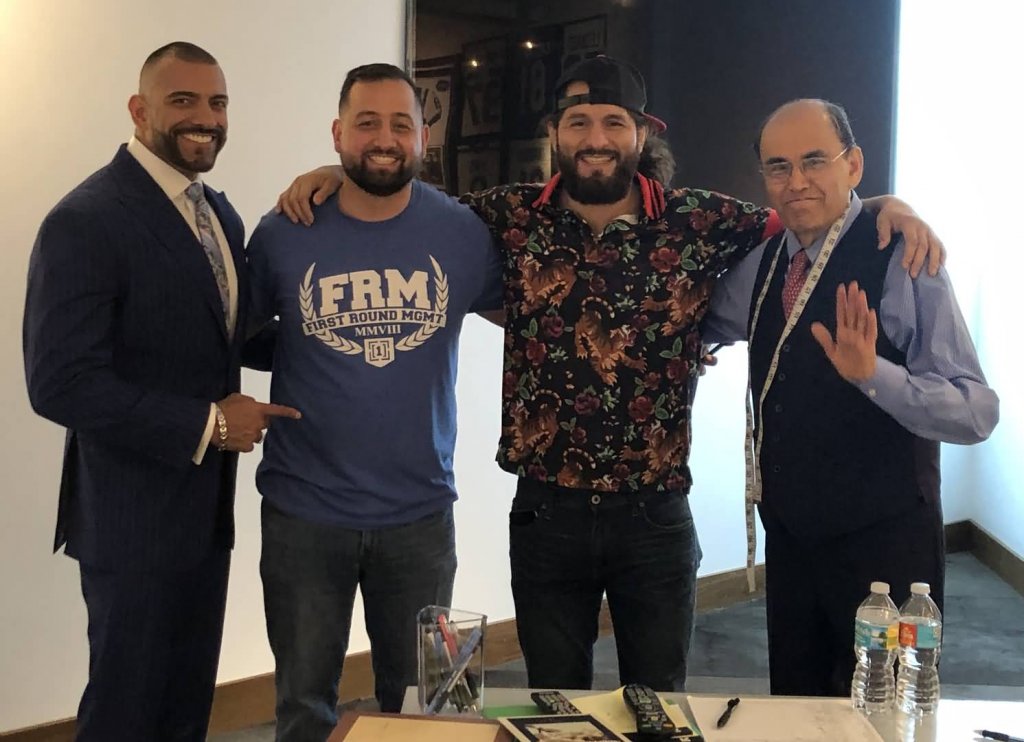 Jorge “Gamebred” Masvidal, is one of the world’s top mixed martial artists. He is currently a leading competitor in the Ultimate Fighting Championship’s (UFC’s) welterweight division. Masvidal has “competed for Bellator, Strikeforce, Shark Fights, and World Victory Road,” in his more than decade-and-a-half long professional career, and “owns the record for fastest knockout in UFC history.” Mohan’s Custom Tailors’ Victor Mohan is a longtime “fan of the MMA sport and a huge UFC fan.” According to Victor, “I’m very familiar with good fighters and great fighters and the differences between them. Thus, I’ve been watching Jorge Masvidal for a long time; first, when he participated in the ultimate fighter show; then other organizations such as Strikeforce. I’ve always thought of him as one of the truly great fighters.” Victor continued, “Previously, I thought to myself, if he ever came back to the UFC from Strikeforce, he would be a dominant force, one to be reckoned with. When the UFC acquired Strikeforce, I knew it was just a matter of time before Masvidal got into a great fighting rhythm like he did in Strikeforce.”

Victor’s many-year admiration for Masvidal led to the two, and Masvidal’s manager Abraham “Abe” Kawa of Miami-based First Round Management – who is renowned in MMA and other sports circles – communicating for several months about the potential of the great fighter having bespoke suits designed specifically for him by Mohan’s Custom Tailors. This came after Masvidal fought MMA powerhouse, Darren Till. Victor said about this:

“Jorge Masvidal was the underdog… but not in my eyes! I knew he was going to beat Darren Till by smothering him with constant pressure like he normally does, both on his feet and on the floor, but then something shocking happened… he knocked Till out in the second round in dramatic fashion. I thought to myself, this is it. He’s got his stride and rhythm, plus KNOCK OUT POWER!”

However, yet another important UFC event further inspired Victor to set up a dialogue with Masvidal. “After he knocked out the highly-touted, highly decorated Ben Askren, a leading MMA and wrestling star and the way in which he did it, I definitely thought, especially with his even greater visibility following this fight, the timing was perfect to approach him.” Mr. Masvidal and Mr. Kawa responded with great interest in Mohan’s, in Victor’s deep knowledge of and dedication to mixed martial arts and ultimate fighting, and the possibility of special custom menswear being designed for Masvidal. According to Victor, “Abe Kawa was, and is, as easygoing and pleasant as they come. He’s a very intelligent person and was happy to set up the meeting between Mr. Masvidal and our team after researching our company and learning about our important heritage and our history.” After this, Victor arranged to fly to Miami for a meeting. Mohan’s has a long history as not only an important menswear corporation, but also, simultaneously, a family business, so Mr. Masvidal and Mr. Kawa were, Victor said, both “pleasantly surprised at seeing my father, legendary custom tailor, Mike Mohan, and my wife at the meeting in Miami, as I left it as a surprise that they would join me. They were touched to see that Mohan’s takes being a family business so seriously.”

Victor described the meeting as follows: “We really hit it off.. We spoke about Ben Askren and his Flying Knee. After finding out that I am Indian, Mr. Masvidal talked about how much he loved Indian food, and that when he comes to NYC for his final fitting, he would like to have Indian food with my family. We spoke about fatherhood, as he has a ten year-old daughter, and I am a father of two beautiful daughters. We connected on many levels. He was humble, sincere, grounded and very respectful. Mr. Masvidal and Mr. Kawa met my great father and my loving wife. This made the meeting all the more special.”

“He has two sides,” Victor said of the MMA great. “He’s the fearless fighter with the heart and aggression of a Lion. His street upbringing – he is a real street fighter, first trained in the backyard of the late, great street fighting legend Kimbo Slice — has made him as real and genuine as they come.” Victor also noted that Masvidal, “looks at trash-talking on social media and to his face the same way… You say something bad about him, he’ll make you pay. He doesn’t take things lightly.” Victor stated that, “this in my eyes makes him a just person.” He continued: “The other side is a truly kind and genuine gentleman. This came to me as no surprise. He was very respectful and kind-hearted, down-to-earth and very grounded with me, and with my father and my wife Cristina who was there taking all the pictures of our meeting. A beast on the octagon, but the greatest gentleman outside… just don’t get on his bad side!”

During the meeting, Victor and his father worked on a custom fitting for Mr. Masvidal. They took Mohan’s renowned bespoke measurements and Mr. Masvidal was also fitted using Mohan’s Custom Tailor’s unique “Custom Shell” technology. This process is the precursor to the creation of special custom garments – suits and accessories – that will be a feature for Mr. Masvidal with his own unique style requirements. Mohan’s is, according to Victor, eager to demonstrate the “unique creativity that can only be done by Mohan’s, the one-and-true Bespoke leader!”

Mr. Masvidal said that something really powerful is coming with the finished products:

“When everyone sees what we got cooking… these suits are going to hurt people’s feelings… in a very positive way.”

His manager Abe Kawa said that “the experience of him (*Victor) coming down, meeting Jorge, showing the stuff, taking the time… we’ve been at this for close to almost three hours now and it’s been amazing… it feels like it was five minutes.”

“We look very much forward to Mr. Masvidal’s final fitting,” Victor said, “when he will fly from Miami to meet us at the historic Mohan’s Custom Tailors’ Showroom in New York City in approximately a month, located in a landmark building right next to one of our city’s greatest landmarks, Grand Central Terminal.”

Victor shared a very special personal story about the meeting: “Right before leaving, my wife’s sixteen year-old nephew called asking if we saw Mr. Masvidal and how it went. My wife’s nephew is one of his biggest fans. She told him: ‘It went great and we are still here…” then she said, ‘Would you like to talk to him?’”

Victor then shared Cristina’s nephew’s own words about the conversation he had with the great fighter: “On Wednesday July 17, I had the pleasure of talking to Jorge Masvidal on the phone. It was one of the most inspirational conversations I had in a while. When we first started speaking on the phone, he talked about how I should work hard on what I want to accomplish in the gym and how I should join a wrestling team or martial arts. He also said that I shouldn’t be in the wrong crowd.” “Because of this conversation,” Victor said, “sixteen year-old Michael is even more motivated, focused and determined to try new things such as wrestling and MMA—his dream is becoming a UFC fighter like Masvidal.”

Finally, Victor stated that “Jorge Masvidal is truly a great person and one of the great fighters, about to get a title shot. The entire Mohan’s Team and I couldn’t be any happier about this, and to be adding another great superstar to our existing extensive list of superstars, champions and legends!”